Home Resources Horrible Holidays What is a beach? A personal view vindicated by the law.

What is a beach? A personal view vindicated by the law.

What does the word ‘beach’ conjure up to you?

Miles of sunkissed sand, blue water and tanned bodies. We may not have the sunshine in the part of the world I come from, Newcastle upon Tyne, but we do have some fabulous beaches: Cullercoats, Whitley Bay, Tynemouth, South Shields, Alnmouth, Druridge and Cresswell – the list goes on. And what defines them all is that they all, like the more famous ones pictured above, have sand – the fine yellow stuff that kids make sand castles out of and which, despite all your efforts infiltrates itself into the seams of your clothes and gets into your shoes and your hair and you find it in your car and your house for weeks afterwards. It is my abiding view that it isn’t a beach if it doesn’t have sand.

However at this point my daughter and I part company. She used to live in Brighton and she and her partner often went down to the ‘beach’ – which plays a minor role in Graham Greene’s classic novel ‘Brighton Rock’. But in my opinion Brighton Beach is not a beach because it is made up of pebbles and these pebbles are uncomfortable to both walk on and to lie on. They give none of the pleasure that soft and yielding sand provides. But she is adamant, it is a beach.

To combat her argument, and to prove my point, I said she should look up the dictionary definition – which she did and triumphantly showed me what was said: 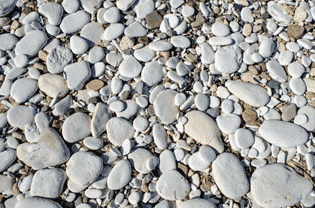 Can you call this a beach?

I must admit to being a little disconcerted by this but I am undeterred. I am still of the opinion that a beach full of stones is not a beach – or at least not what comes to mind when one thinks of a beach. The most I am prepared to concede is that if the beach is made up of stones its description should be qualified. It should be described as a ‘pebble beach’ or a ‘shingle beach’ not simply as a beach. This is not to say that a beach that has some stones or pebbles on it is not a beach but to be a beach it has to be predominantly sand. I subscribe to the point of view of the man on the London omnibus – he would not describe a stretch of shoreline made up solely of stones as a beach.

I am comforted in my view by a Trade Descriptions Act case that goes back to 1984 (Thomson Travel Ltd v Roberts (1984) 148 JP 666). In that case a holidaymaker complained about a description in a holiday brochure that said his hotel was ‘right on the beach’. On arrival at his hotel in Ocho Rios he found that the ‘beach’ was a man-made construction consisting of an area of sand approximately 51 yards long and 17 yards wide retained behind a concrete wall bordering the sea. Access to the sea was by ladders down to water level at which point the depth of the sea was equivalent to the shallow end of a swimming pool. The only other area which could possibly be regarded as a beach was an area of about 100 square feet consisting of sand and rock which is out of sight of the hotel and which some guests never managed to find. 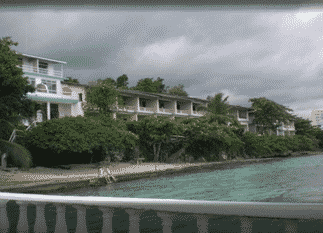 The beach in question

In a decision which was upheld by the Divisional Court the Magistrates said of this ‘beach’:

“We were of the opinion that the description in the brochure would create, in the mind of the purchaser of the holiday, an impression of a substantial stretch of natural beach along the coastline. It is not possible to say whether this should be pebble or sand, but without qualification the natural assumption would be sand.”

“Nothing at the hotel could be described as a beach, as the words would be interpreted by the average person.”

I rest my case.