What liability, if any, do hoteliers have for the safety of guests in circumstances where guests take unnecessary risks? This was the situation which the court had to consider in the recent case of James v The White Lion Hotel [2020]. 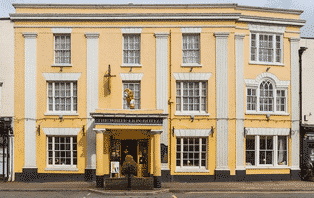 On 5 July 2015 Christopher James checked into a twin room at the White Lion Hotel in Upton upon Severn, Worcestershire. The purpose of his visit was to attend a wedding near to the hotel. He was accompanied by a friend who was staying the room with him.

Having returned to the room following the wedding in the early hours of the following morning Mr James was tragically killed when he fell out of the room’s window and landed on the pavement some 9 metres below.

Christopher’s widow, Deborah brought a personal injury claim against the hoteliers alleging breach of the duty owed by them to her late husband under the Occupiers’ Liability Act 1957 (“the Act”).

The hotel dates back to the 16th century and is a Grade II listed below with the result that the windows were low down. Mrs James asserted that the window constituted an unacceptable risk to her husband’s safety. The window was low down and access to it was hampered by the position of one of the single beds in the room which extended across 2/3 of its width. Given the restricted access Mrs James believed that her husband was likely lying across the bottom of the single bed with his head at/out of the window and that somehow he fell forwards and to his tragic death.

The hoteliers asserted it was unlikely Mr James was lying across the bed and much more likely that he was sitting on the window sill or crouching to the side of the window and leaning out of it. Counsel for the hoteliers maintained that the risk of a person falling from the window was non-existent unless that person chose to open the window, crouch down whilst at the same time deliberately preventing the window from closing (as the lower sash on the window would close under its own weight) and then proceed to lean out. This, counsel contended, was not a risk which was reasonably foreseeable and in respect of which there was no duty upon the hoteliers to guard against.

Alternatively, it was the hoteliers’ case that any breach of duty was not legally causative of the accident and did not more than provide an opportunity for Mr James to expose himself to the risk of falling out of the window in the way he did, such conduct on his part breaking the chain of causation.

As well as hearing evidence from Mrs James and Ms Palfreyman, the friend with whom Christopher was attending the wedding, the court also heard evidence from Mr Coates, a chartered environmental health practitioner employed by Bromsgrove District Council as an investigator for Worcestershire Regulatory Services.

He gave evidence that the considered the window in the room exposed any person to serious risk to their safety due to the height of the sill, the opening height and the width of the window as well as the position of the bed close to the window.

It was also the case that following an investigation into the accident the hoteliers were prosecuted for offences contrary to Section 3 of the Health and Safety at Work Act 1974. Guilty pleas had been entered by the hoteliers to these offences with the basis of plea accepting that the window posed a low but material risk to an adult occupying the room.

The law
The relevant provisions of the Act are as follows:

(b) The rules enacted by the two next following sections shall have effect, in place of the rules of the common law, to regulate the duty which an occupier of premises owes to his visitors in respect of dangers due to the state of the premises or to things done or omitted to be done on them …”

(1) An occupier of premises owes the same duty, the “common duty of care”, to all his visitors, except in so far as he is free to and does extend, restrict, modify or exclude his duty to any visitor or visitors by agreement or otherwise.

(2) The common duty of care is a duty to take such care as in all the circumstances of the case is reasonable to see that the visitor will be reasonably safe in using the premises for the purposes for which he is invited or permitted by the occupier to be there.

(3) The circumstances relevant for the present purpose include the degree of care, and of want of care, which would ordinarily be looked for in such a visitor, so that (for example) in proper cases:

(a) An occupier must be prepared for children to be less careful than adults; and

(b) An occupier may expect that a person, in the exercise of his calling, will appreciate and guard against any special risks ordinarily incident to it, so far as the occupier leaves him free to do so. …

(5) The common duty of care does not impose on an occupier any obligation to a visitor in respect of risks willingly accepted as his by the visitor (the question whether a risk was so accepted to be decided on the same principles as in other cases in which one person owes a duty of care to another). …”.

The judge concluded the hoteliers owed a duty to Christopher and that there was a foreseeable risk of serious injury due to the state of the premises. He further held that if injury did occur it would inevitably be very serious, if not fatal and that there was a minimal cost to the hotelier as regards preventative measures (installation of restrictors).

The hoteliers’ counsel continued to submit that Christopher had been willing to take the risk from an obvious danger and that this was fatal to Mrs James’ claim. The judge disagreed. He concluded that an adequate risk assessment would have required a step which in his view would have informed of the extent of the duty to take reasonable care under the Act. Accordingly, he found that there had been a breach of the duty under Section 2 of the Act.

As to the hoteliers’ alternative argument, namely that Christopher’s actions broke the chain of causation, the judge held that the conduct in question was reasonably foreseeable. It was within the scope of the risk created by the hoteliers that a visitor may open the lower part of the window and lean out. That risk was accepted as material. Whilst there was a degree of unreasonableness, it was a clear misjudgement but was an act that others might take. Taking all these factors together the judge considered that Christopher’s actions in sitting on the window sill did not break the chain of causation; the accident remained the direct result of the hoteliers’ failure to apply window restrictors to a very low window.

In all the circumstances, the court found in favour of Mrs James and upheld her claim. However, the court did make a finding of contributory negligence on the part of Christopher. The judge held he could foresee the danger of falling and that in choosing to act as he did he was guilty of a blameworthy failure to take reasonable care for his own safety. As a result, he made a finding of 60% contributory negligence.

[The case report can be found here]